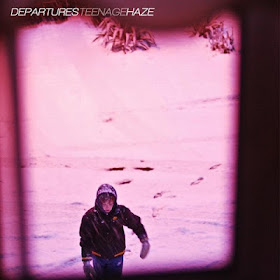 If you're a fan of emotional melodic hardcore, Departures is probably a band that you've heard about. Their debut full-length album, When Losing Everything Is Everything You Wanted, displayed the band's passion and true potential and now they've taken it to the next level with their forthcoming album entitled Teenage Haze.

From the opening riff, it's made clear that Departures has really stepped up their game and refined their sound even more. "Drained Out" and "Making Maps" is the perfect one-two punch that gets the album off on the right foot and it doesn't let up until the fifth track – the interlude, which is also the title track. "Teenage Haze" is a much slower-paced track that features nice, calming melodies and a great drumming pattern. Just before it wears out its welcome, "Teenage Haze" fades out into the next track.

The album really takes off again on "Where the Time Will Go." The track as a whole is strong, but the second half is extremely impressive. After a lengthy and depressing intro, "Where the Time Will Go" picks up and it only gets better from there. About a minute after the first tempo change, there is an even more tremendous tempo change which cues the pounding drums and powerful chords that eventually build up to an epic climax.

The next two tracks, "Planting Weeds" and "Small Steps," are an exceptional way to end this musical journey – like how the first two tracks kick it off. "Planting Weeds" was released by Departures about a month prior to the album's release and it's a solid track that flows into the final track seamlessly. "Small Steps" displays as much emotion as any other track on Teenage Haze and, if you tack on the fact that it's very strong instrumentally as well, this will most likely be a favourite for many listeners.

The only gripe that I have with Teenage Haze is that it ends quite abruptly. "Small Steps" starts to build up near the end of the track and I was expecting a huge melodic lead or something spectacular to close out the album; however, I was left with a bit of an empty feeling when the music just faded out.

If you like what you've read in this review and what you've heard from the previously released "21" and "Planting Weeds," be on the lookout for Teenage Haze which is being released on November 26 via In At the Deep End Records and No Sleep Records. Departures' new release is an onslaught of melodic riffs and leads, impressive drumming and passionate lyrics and vocals that are the closest you could possibly get to hearing something like More Than Life without actually listening to them.